16 July: Feast of Our Lady of Mount Carmel 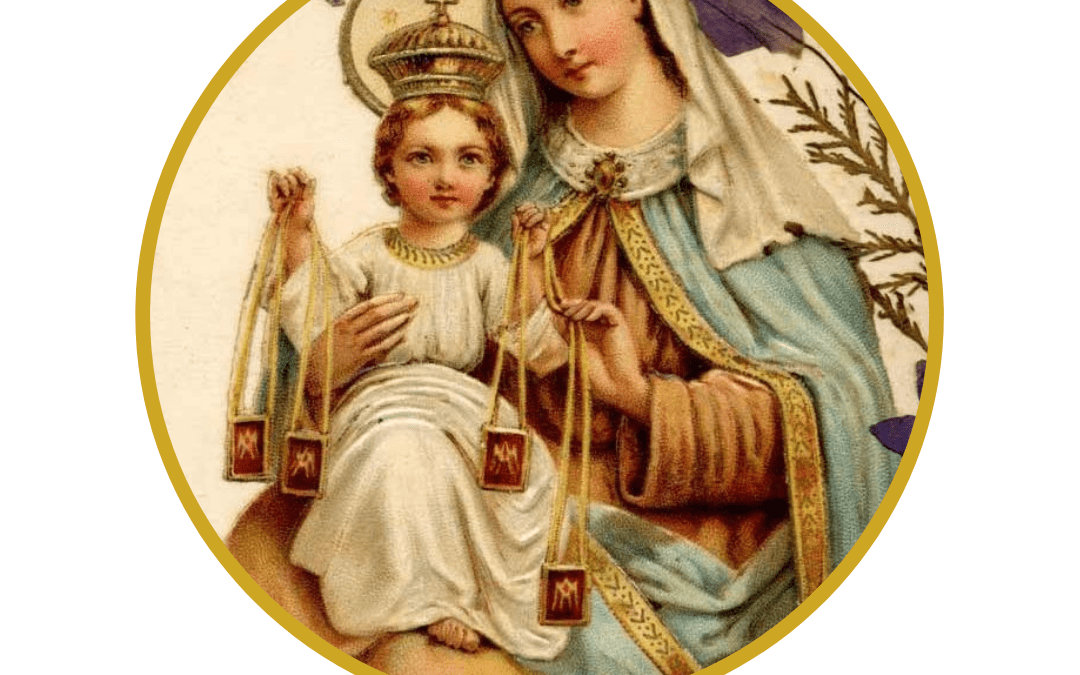 16 July: Feast of Our Lady of Mount Carmel. This liturgical feast was likely first celebrated in England in the 14th century to give thanksgiving to Mary, the patroness of the Carmelite Order. The Order was founded at the site thought to have been the location of Elijah’s cave, 1,700 feet above sea level on Mount Carmel. (The mountain overlooking the Mediterranean Sea on which the prophet Elijah famously challenged the priests of Baal and won the people over to the true God.) According to Carmelite tradition, hermits lived at the site from the time of Elijah until the Carmelites. They think that from the time when Elijah and Elisha dwelt on Mount Carmel, priests and prophets, Jewish and Christian, lived holy lives at the adjacent fountain of Elisha. A Carmelite monastery was founded at the site shortly after the Order itself was created, and was dedicated to the Blessed Virgin Mary under the title “Star of the Sea” (“stella maris” in Latin). The Carmelite Order has grown to be one of the major Catholic religious orders worldwide, although the physical monastery at Carmel has had a difficult history. During the Crusades, the monastery often changed hands (it was converted into an Islamic mosque, a hospital, and then in 1821 was destroyed). A new monastery was constructed on Mount Carmel over a cave. The cave, now the crypt of the church, is called “Elijah’s grotto” by the Carmelite friars who have custody of the monastery. One of the oldest scapulars is also associated with Mount Carmel and the Carmelites. The Brown Scapular of Our Lady of Mount Carmel, according to Carmelite tradition, was presented by Our Lady to St. Simon Stock (the Carmelite Father General) on July 16, 1251. Our Lady gave Saint Simon the following promise, saying: “Receive, My beloved son, this habit of thy order: this shall be to thee and to all Carmelites a privilege, that whosoever dies clothed in this shall never suffer eternal fire… It shall be a sign of salvation, a protection in danger, and a pledge of peace.” The Carmelites refer to her by the title “Our Lady of Mount Carmel.” The spread of the Carmelites in Europe is also largely attributed to the work of St. Simon Stock. The Carmelite Order was formally approved in 1274 at the Council of Lyon. The Feast of Our Lady of Mount Carmel entered the Church calendar in the 18th century. However, since the 15th century, devotion to Our Lady of Mount Carmel has centered on the Brown Scapular, a sacramental associated with promises of Mary’s special aid for the salvation of the devoted wearer. {Note: wearing the Scapular demonstrates a commitment to follow Jesus, like Mary, the perfect model disciple of Christ. It is an expression of the belief that the bearers of the scapular will reach heaven, aided by Mary’s intercession. The Carmelites insist that it is not a magical charm, an automatic guarantee of salvation, or an excuse for not living the Christian life. It is instead a sacramental approved by the Church for centuries which demonstrates a commitment to follow Jesus, like Mary, and to live a life of prayer and faithfulness to God.}

Ideas for celebrating this feast at home: