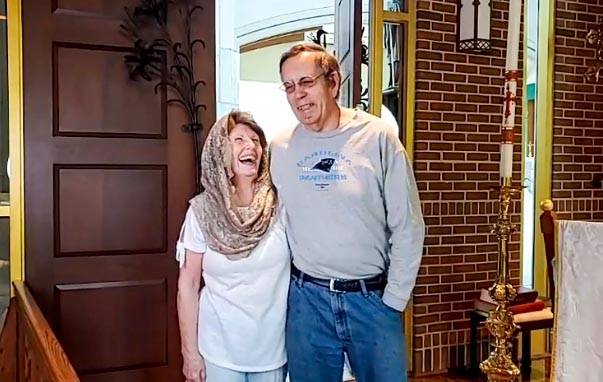 Yvette & Curt will be united in the sacrament of Holy Matrimony on Friday, 1 May 2020 at 2p (Carmelite Promises 1:50) with celebrant Father Christopher Smith. The entire Mass will be livestreamed on our Facebook page. Log in around 1.45p to get your virtual “seat.” Everyone is invited to join!

“Meet” the couple in a short interview seen here! And, learn about their love story below!

Our Love Story, by Curtis

I was lost. Driving along the country roads of South Carolina near the Georgia border was an adventure for sure. I thought, couldn’t they at least put up road signs to let you know where you were? Everything was unfamiliar and I had no idea what direction to go to find my destination. Still, the old country roads, the farmers fields, and the lush green woods were the same ones that I knew as a child. Memories came flooding back and I relaxed a little bit. I thought, this is my new home. At the age of 70, I would begin a new life, in a new state with my grown children and grand-children.

At last, I caught sight of a road sign that led to my Lay Carmelite community’s picnic. I turned in to the driveway, anxious to meet the members of our community . I will be good, I thought, to make new friends and be with those who share my deep faith life. Little did I know that I wasn’t lost at all and God wanted me to meet someone who would become so much more than a friend.

Our hostess was gracious and everyone was very welcoming. Soon enough, I was at ease and enjoying the company of our community. Then, she walked in. She was late. The last arrival. The first thing I noticed was her smile – the kind that lights up a room – and her laughter. There was only one seat left. It was right next to me. After the introductions, we began to talk. It was amazing, I thought, how easy she was to talk to. I loved her easy-going, relaxed attitude. She laughed often and was so open and honest. The time just flew by, and before I knew it, she had to leave. Before she left, we talked about going to a Latin Mass together – a real treat for me. And then, I didn’t see her again for a month and a half. But……… I did find out her phone number.

When she got back, we went to that Mass together. Not a Latin one. But, Mass together just the same. Then, we went to another one and another one. Looking back on that day we first met, I am absolutely certain of two things. I wasn’t lost at all on the day we first met and God  had arranged for me to meet someone who would become so much more than a friend. You see, that girl who sat next to me in the only empty chair in the room – well, she’s going to be my wife. We are to be married on May 1st. Each and every day I give thanks to God for that empty chair that God filled with the precious gift of  Yvette and for the new life we will share together.

Our Love Story, by Yvette

In 2014, I became a widow and started my journey to discover who this women was now and would be. Many hours of prayer led me directly to where God had planned. The plan has not totally unfolded yet but is just beginning.

One night the inspiration came to me that I could now be as Catholic as I always wanted to be. I began regular visits to Adoration, made many new friends, and became much more involved with Prince of Peace. All this led me to discover that I may have a vocation as a Lay Carmelite, and was accepted into the Community to begin my six years of discernment in the fall of 2018.

Now I was going to an assigned Adoration hour, daily Mass attendance, and living a life of prayer and service. I was also thinking, “this is good and I’ll be happy for the rest of my life with all I was doing.”

But something was missing, the winter and spring of 2019, I felt an emptiness, felt lonely, and thought that I needed to visit my children and travel some. So I made plans for several trips, 7 to be exact, by Christmas.

I still had the feelings in June and one night in the Adoration chapel, I talked with Jesus and prayed that I was still having these lonely feelings, to please help overcome the loneliness and make me the best Lay Carmelite I could be.

In June 2019, our Community had a picnic at the Director’s home. I had planned to go but almost decided not to go. I had a cake for my son’s birthday and they were going to help him celebrate, so I knew I should go. It took me longer to get to her house and when finally I arrived there was one seat left, beside some man I did not know, thinking he was someone’s spouse, I asked if the seat was taken and it was not. So I sat down and we became acquainted and I learned that he was a professed Lay Carmelite for 25 years and transferring into our Community. I really enjoyed talking with him. It was Curt.

I continued on my trips for June and July. While visiting my son in Chicago, he asked me if I was seeing anyone, which is very unusual for him, I said no but I had met a really nice guy at a picnic and would like to get know him better but I doubt if there was any chance. That was that until……

We had our Community meeting in August and after the meeting Curt came up to me and said he would like to go to the Latin Mass at POP sometime. I told him that I usually went to 10 Mass but said that someone else in our Community goes to the Latin Mass. He immediately said I would like to go to the 10a. A little puzzled at this time, I said, “Let me give you my number.”  He said, “I have your number.” I kinda looked at him but in back of my mind, I was thinking, “YES!” but I really didn’t think I would hear from him any time soon but the next Sunday we were together for the 10a Mass.

After Mass he asked me to lunch outside the Adoration chapel and I told him that I do not usually shop or patronize businesses on Sunday, but he could come to my house for lunch, which he did. (By the way, I really had not planned anything for lunch, but some how pulled off a half way decent lunch.) We had a beautiful afternoon together. The rest is history, there has been many beautiful times together since then.

Our first three dates, we went to Mass together, the third was St. Rafka’s and Father Bart called us a couple. We were talking and seeing each other now almost daily. We fell in love immediately and became engaged in October 2019, and will be married May 1, 2020.

Along the way, God has made us do things His way. Curt was going to propose to me on the beach in Dayton, Fl, but God said no. That weekend was biker weekend, no room in the inn, but also, a lot of noise. So we decided to head up the road to St. Augustine. The next day, Curt decided to propose to me on the beach there. God said no. It was pouring down rain, so before heading toward home, we though we would at least drive through the town, and we decided to visit St. Augustine Catholic church, it was beautiful and as we prayed at the altar, he knew this was the place. In front of Our Lord on the altar and tourist, in the oldest Catholic church in the US, he proposed.

We planned our wedding and reception for May 1, 2020, feast of Queen of Heaven, with family and friends, God again said no, He sent the “virus.” Now with wedding plans cut to bear essentials, the date is still a go, as our love for each other grows each day. The wedding will be in the Adoration chapel, where it all began 🙂

I only asked for help with my loneliness and to be the best Carmelite I could be. He sent me, Curt, a personal spiritual guide to climb Mt. Carmel and a fantastic man to love. I feel so very blessed because Curt is a very loving and caring person, who makes me feel so special by the understanding way he treats and respects me totally for just being myself. God sent me the perfect mate that I want to love and share the rest of my life with.

Our Lord has been a guiding force in our lives the last year and half. The way He made things happen to bring us together, how we met, our many common interests, but most important – our love for Jesus – is the center of our love for each other and our prayer lives. It is totally beautiful and I am looking forward to many happy days together and helping to get Curt to our heavenly home. He is a true blessing in my life.

I do not know where God is leading us but I have faith that He wants Curt and I to do His work together. We are fully open and committed to letting God be our guide.

Our endless love for each other has only just begun.