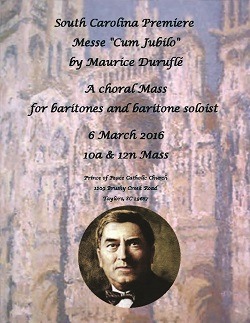 A choral Mass for baritones and baritone soloist.

Maurice Durflé, born in Louviers, France in 1902, showed such a great talent for music that at the age of ten his parents enrolled him in the cathedral choir school at Rouen. It was there that he gained a life-long love of Gregorian chant through daily chanting of the liturgies. At age eighteen Duruflé began his organ studies at the Paris Conservatory. He remained in Paris until his death in 1986, working as organist at Notre Dame and Saint-Étienne-du-Mont, and as professor of harmony at the Paris Conservatory. A strong advocate for sacred music, Duruflé’s limited output as a composer included his Requiem, a work that is by far his most famous and most widely performed.

The Messe “Cum Jubilo” (1966) was Duruflé’s last large-scale composition and, at the same time, the most daring and interesting of his choral compositions. Dedicated to his wife and colleague, Marie-Madeleine Duruflé-Chevalier, the Mass receives its name from the chant Mass designated for feasts of the Blessed Virgin Mary, upon which the composition is based. The compositional feat of this unique choral Mass which utilizes only one vocal part was to avoid all use of vocal polyphony in order to remain true to the very essence of Gregorian Chant, while being able to maintain sufficient musical interest. Duruflé creatively and colorfully sets the Ordinaries of the Mass (minus the Creed) through utilization of compositional techniques that often abandon traditional tonalities for harmonies and scales to evoke the moods needed to further elaborate on the texts. This centrality of chant melodies to the composition further reflects his commitment to chant as the primary medium for the sung prayers of Holy Mass.